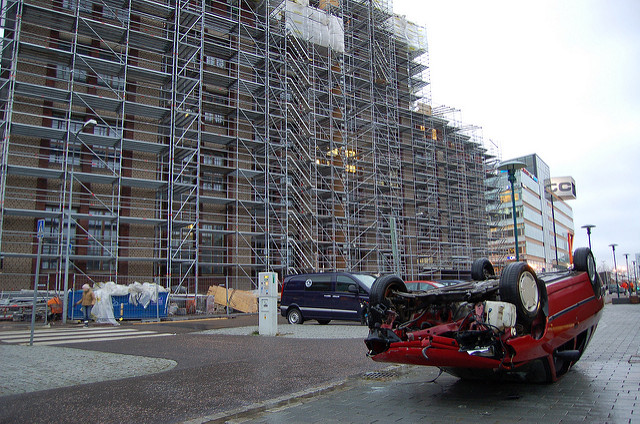 I think I just witnessed a death. I think. Maybe not.

All I know is the car was flipped over onto its windshield. And it was smoking.

I was smoking too. Well, I had a smoke soon after I saw what happened. More fumes.

The car was travelling the wrong way on a one-way street. It must have been going fast to make the streetlights shake like that…

I didn’t actually see the car flip over. I mean, there was a truck blocking my way.  I’m sorry if I gave the wrong impression. I think people like to pretend that they were involved, even in a tragedy.

People swarmed the car almost immediately. One man took his shirt off and attempted to open the passenger’s and driver’s side doors. No luck.

Such is the privilege of parents.

I think people take a lot for granted.

I am not the greatest philosopher. I used to read a lot more, but lately, I have been reading a lot less. Surely, someone could put this in perspective if I had only had the right book, and the right names, but my bibliography isn’t strong enough.

I figure it’s a Schrödinger’s cat type situation. A car is sort of like a box right? So, the man is technically dead and alive. Dead or alive.

I think people make up a lot of silly theories.

The man must have…wait…Why am I assuming it’s a man? Fuck.

I drink a beer, as I write this, not more than half an hour after it happened. Maybe the person was drinking or rushing to get a drink. Or neither.

I think people speculate too much.

I thoroughly hope the person is all right. Of course, I do. Why mention that? Well, maybe because I feel guilty.

I got to drive in relative peace. I felt slightly nervous. Two blocks away from the accident, a family entered a restaurant.

Oh god, I hope it wasn’t a family.

Life is fucked up, you know? I think everyone knows that.

One person is obviously, and at least, severely injured while another requires sustenance. One struggles for their life. One eats, and most likely indulges.

I hurry to complete this before Facebook gets a hold of the story and spins it, and churns it, and changes it. Before everybody puts their two cents in.

I think everybody likes to have their own opinions. It makes them feel better.

The first thing I know for sure is that I hope the person or peoples involved are okay.

Maybe I’ll say a prayer tonight for their safety.

The second thing that I know is that I am thankful that it wasn’t me. I guess I’ll have to apologize for that.

I think people are selfish.

Sorry god, for I am selfish, and cruel. Sorry God, these are just my first thoughts.