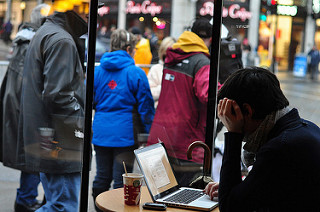 I grew up consistently being undermined by a lot of people: my parents, my extended family, my best friends, they were all culprits, without meaning to be. It seemed that every time I had something to say, an opinion to add, someone was ready to shoot me down with a somewhat insulting remark that would be passed off as a joke. Of course, I always did the courteous thing and laughed along with everybody who was laughing at me at this point. After repeated incidents, however, I started to question whether my opinions really did deserve to be shot-down every single time – was I offering stupid perspectives without realising it? Did I deserve to be laughed at? I started to question my own intelligence, and in light of that, started to self-censor. After a while, I stopped offering opinions all together.

Over the years, I have discovered that this kind of shooting down of individuals is more prevalent in groups. Group dynamics are always a little hard to judge, and obviously also subject to change, but generally you have the weak and the strong ones in a group. For lack of better terms, I will refer to the weak as the ‘victims’, and the strong as the ‘bullies’. I must add that my parents, extended family or friends did not intentionally hurt me in any way, in the way the word ‘bully’ implies. However, I think it is important to note that even hurtful jokes can have dire consequences.

Back to group dynamics. What irks me most about this is that the ‘bully’ can be the sweetest person to the ‘victim’ when they are both alone, but as soon as other people get added to the mix, the sweetness plummets into something much darker. It has been said that bullies bully because they need to find their own place within a given group, whether or not that be at the expense of other people. For the victim, this means that a person who seemingly had their back has basically violated their trust. Unfortunately, this kind of casual insensitivity is becoming a reality in too many friendship groups today.

One of the consequences of this constant undermining that I was getting at home was that my self-confidence was down the drain; I didn’t believe that I had the intelligence, the credibility, or the mental strength to be where I was. But after eighteen years of this (after which I’d just accepted it and chosen to speak as little as possible), I moved away and found people who not only respected, but also valued what I had to say. Looking back, this had such amazing consequences for my self-confidence that if I could go back and meet those people for the first time over and over again, I would. It felt strange to be listened to and I do sometimes still wonder whether or not they were faking it. After that, I regained what I had lost in all those years of being quiet. I started to believe that I was smarter than I thought and that I was more mentally stable than I had previously believed. Also, because I’d chosen to keep quiet for so long, I had also lead myself to believe that I was an introvert, which I now know was not at all the case. I love people, I love being around people, and I love more than anything when we can all have a healthy discussion about our opinions.

Very recently, I met a lovely lady who I can safely say is one of the best friends I have ever had. And yet she too has started doing the dreaded act of undermining me when we’re in groups, and being exceedingly loving when we’re alone. I know now to avoid people like this at all costs, or at least to call them out on their shit when the time is right. But realistically, what do you do when these people mean so much to you? You keep quiet and laugh with the others.